In 2009, I restored an expanding dining room table that was fitted with a mechanism called a screw expander. The mechanism consists of a long threaded screw that turns in a long tube nut. Both pieces are fitted to either end of a dining room table and when turned by a removable crank or winder from one side, the screw and the nut work against each other and the table is opened. The beauty of this hardware is that it allows one person to open the table so that leaves can be put in, versus the traditional methods using one person at either end pulling the table open. A deeper look at the history of the screw expander and one of its principal manufacturers, Joseph Fitter, can be found here:

The following link shows the second half of the post I wrote and has some completed photos:

One of the books I used to research the screw expander was The Cabinet Maker's Assistant published by Blackie and Sons in the 1850's.  The author was anonymous. It has great drawings of the mechanism and construction details for building a table that would utilize a screw expander. I bought a reprint by Dover Press, but there is also a scanned copy of the original available here to view online:

Of all of the pieces I have written about on my blog over the years, I have received the most comments, emails, and calls about the original post I wrote on Joseph Fitter and the screw expander. I have gotten emails for as far away as Australia and  Norway and even once got a call from someone in Trinidad concerning these tables. Most questions regarded where a person might replace a missing table crank or even the entire mechanism. Others inquire as to what the value of their table might be.

Recently I received a call from a woman who had one of these tables and was not only relatively close, but also wanted me to restore the piece. I was delighted at the prospect of working on another of these tables and we made plans for me to pick the table up. While on the phone, the customer informed me that the previous owners of this table were Rear Admiral George Stephen Morrison and his wife Clara. Rear Admiral Morrison was the commander of the U.S. Naval forces in the Gulf of Tonkin during the incident there in 1964. In addition to this, they were also the parents of the singer Jim Morrison, Front man for the band "The Doors".

The Morrisons had owned the table while living in London in the 1960's. When they moved back to the United States they sold the table to the current owners, who later shipped it here. The owner told me that at the time, Jim Morrison was already living in California and probably never took a meal at this table.

Even without all of this historical interest, this table is a fine example. The table is made of good mahogany and uses oak as a secondary wood. The screw expander was comprised of a long screw, a second larger hollow screw which also functioned as a tube nut for the first, and finally an even larger outer tube nut. This telescoping design allowed for the expander to open wider allowing for more leaves to be inserted in the table. This example accommodated two wide leaves, while the first one I worked on only one. In addition to all of this, the detail of the craftsmanship in this table was superb and the ornamental elements, like the turnings and the carvings, were well executed.

Over time the table had developed a few problems. The biggest was that the table's wooden slides that keep the table flat when open had worn and stopped functioning correctly so that one set of table slides would jump the track once the table was opened up. To remedy this, the table was lifted while being opened by the top on one side to attempt to keep the slides on track. This led to the top becoming partially detached from the base on one end. Besides those mechanical issues, the finish was damaged but restorable, and the slides and screw mechanism were in need of cleaning.

Below are photos of the table and the work that we did to restore it to a functional and beautiful state. At the bottom of the post are several photos of the restored table.

The hazy area in the photo below is an area where the finish had been eaten away on one end of the table.
These next two photos show some veneer being glued down on the outer surfaces of the table slides.
The end closest to the viewer is missing the table top in this photo. It was removed for patching.
As mentioned above, the table end hand been lifted by the top repeatedly causing the screws that fasten the top to the base to tear out. Below is a photo of the top flipped over to work on.
This photo shows one of the screw holes that had torn out.
The remedy for this is to drill out the torn area with a Forstner bit,creating a flat bottomed hole. Face grain plugs of the same diameter as the Forstener bit holes are then inserted in the holes with glue. Once the glue has set up, the plugs are pared flush with the underside of the top and the screws are fastened into the new wood. None of this repair is visible from the top. Below are a few photos of the process.

The Forstener Bit holes.
The Face grain Plugs inserted.
A face grain plug pared flush, the excess scraps are used again down the road for the same procedure.
These following photo shows the base with top completely removed. The table slide on the far side of the base has a significant droop in the center.
These next two shots detail the slide that had fallen out of its track. The pieces that guide the slide in a straight motion had worn away and needed to be replaced. This is one reason that the slide did not function properly. The other was that the joinery on one end of the table had loosened up and the glue blocks that added strength to that joinery were missing. New guides were made for the slide and the joinery was glued and new blocking put in place, as seen in the photos below.

Gluing the loose joinery on one end of the base.
The guides for the table slides removed from the table. The one on the bottom is the original and the one on top is the replacement.
This view of the same guides from one end shows the wear on the original (the one on the right). This worn wood allowed the slide to slip its track and malfunction.
The next photo shows the base disassembled while the guides were replaced.
The replaced guide.
Once the joinery was tightened, the missing glue blocks were glued in place and stained to match the original color. The next few photos show that process.


These next photos show the base repaired and the mechanism lubed. The slides were cleaned and shellac was applied and then waxed with paraffin wax to allow the table to open and close as it should.

After the repairs were made, the finish was restored, color was selectively added to the faded top, and the hardware was polished. Below is a before and an after shot of one of the casters before and after cleaning.

The remaining photos show the restored table from various angles and with the leaves in and out. It was a pleasure to have such a fine table (and one with such an interesting history) come through the shop. 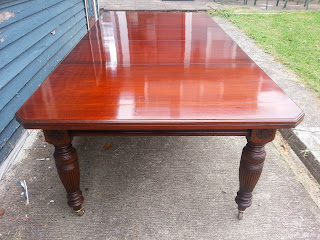 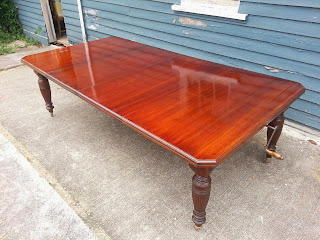 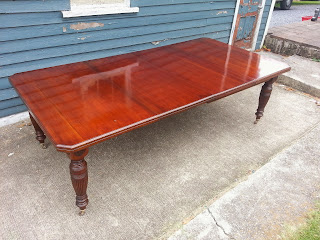 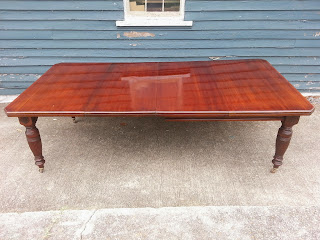 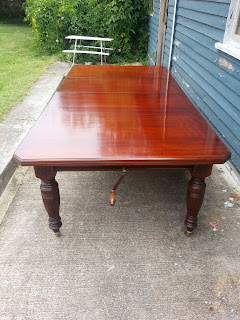 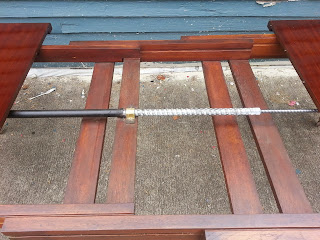 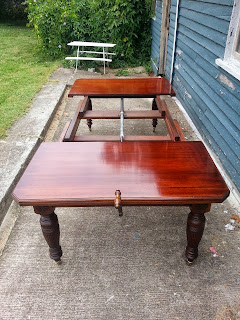 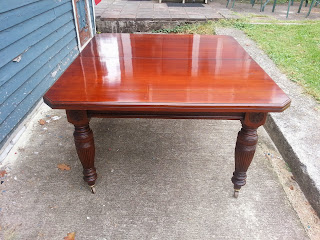 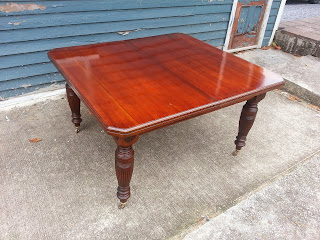 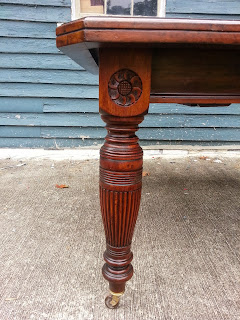 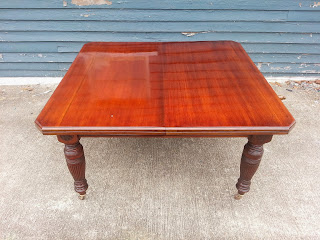 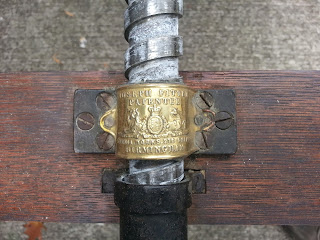 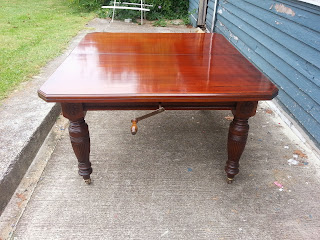 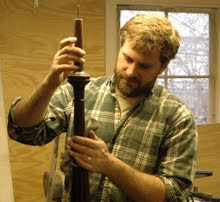 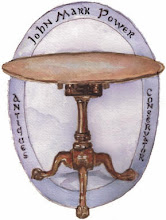